Thanks to the leadership of Dr. Tea over North America Chinese Tea Association and mylovetea.com team which have done the tea demonstration for US President Bush`s family, the tea prepared for the WTeaO Mylovetea Midautum Festival is also very unique and interesting, Lapsang Souchong (father of world black tea), World Expo Gold Medal Winning Phoenix Oolong Tea, the pristine moonlight white tea, mysterious “royal tea”, as well as many other tea products like the Dian Hong Tea and the similar tea that President Xi Jinping and President Obama drink together at G20 gathering. This event has been partially sponsored by China’s domestic tea companies like Phoenix Dian Hong Tea and Lapsang Xiaoxiang Black Tea of Hunan  for their support and sponsorship, which had gain people’s wide acclaims.

Moon cakes, in addition to those extensive materials like wu-ren, sesame seeds, green beans and other traditional moon cakes, a special taste of green tea moon cake is provided with a combination of the romantic moonlight and the natural freshness of green tea.

Dr. Tea (Xingcai Zhang) also introduced the world tea organization (wteao.org) and share the experience of doing the tea demonstration for the US president`s family! World Tea Organization (WTeaO.org) is a world-wide platform that units and serves world tea associations, producers, merchandisers & tea lovers, and promotes the Tea Science, Tea Health, Tea Art and Tea Culture of “Healthy, Harmony, Pure, Nature” all over the world. Also, we apply tea as a platform for culture, art, science and technology development, for innovators, entrepreneurs and investors. We are connecting the world of tea and the world with tea.

Prof. Mildred Dresselhaus is the Advisory Board President of World Tea Organization. She is MIT Institute Professor who had won numerous awards including the Presidential Medal of Freedom from President Obama, the National Science Medal from President Bush etc.  She has served as president of the American Physical Society, the first female president of the American Association for the Advancement of Science, and treasurer of the National Academy of Sciences. She was also the Chief editor of Science magazine. She also got the UNESCO Awards for Women in Science, 2007, considered to be the one the five most outstanding female scientist all over the world. Dr. Tea (Xingcai Zhang) is President of the World Tea Organization. World Tea Organization just send greetings to Mr. Tianfu Zhang for his 107 birthday, and awards him with Lifetime Achievement Award and issued letter of appointment to him as senior advisor.

In addition to tea, this Mid-Autumn Festival Gathering has a special arrangement for the Chinese Guqin, the oldest musical instruments with most cultural charm and depth. The performance sounds clean and subtle and to a distance, “Autumn Song” brings the mind with the wind to the moon, goes straight and deep into the heart. It even provokes Dr. Tea for new poetry making.

Participants including the elderly as well as child are all happily drink the tea and enjoys the wonderful reunion. Some said: “Mid-Autumn Festival, I just can’t imagine that it is possible in the United States to have such a poetic Reunion with Guqin and Tea. It is wonderful.  As a Chinese student at Boston, the farther away from home, the more cut homesickness. Thanks to the organizers that brings the most authentic and beautiful Chinese culture to us. ” There are also friends expressed; “This is the first time I heard the story of Mid-Autumn Festival. It is very interesting. Thanks to the organizers for the wonderful gathering, especially the activities predominantly in English, that even I do not know Chinese but I can understand, very interesting, thanks!” Dr. Tea expressed thankfulness to all people who arrived at the scene and expressed great gratitude to the profound Chinese culture. I feel thankful that at the world culture center of Boston, at MIT and the Cha/Tea river, at the Mid-Autumn Festival, we had a wonderful reunion night with highest satisfaction. Dr. Tea sings his newly written poetry on the spot:. “Moonlight reflected on the pure mood, the sentimental autumn is coming with the wind from the wood. Looking forward to the world with sun shining god`s life-hood, the tea river is the peaceful with the thankful mood.! What a wonderful Mid-Autumn Festival! (Photo by Shiyu Xu) 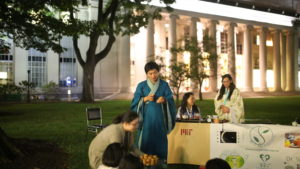 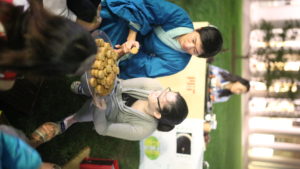 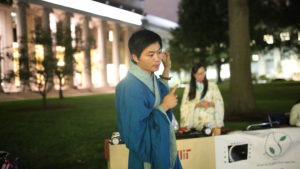 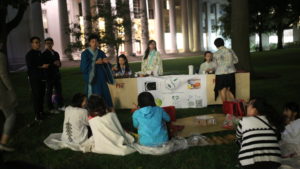 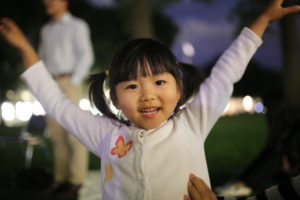 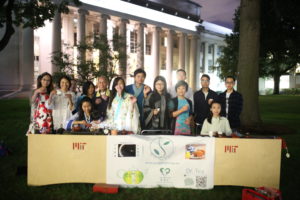 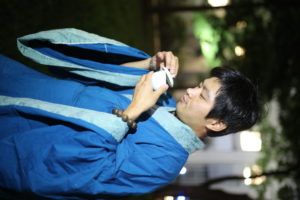